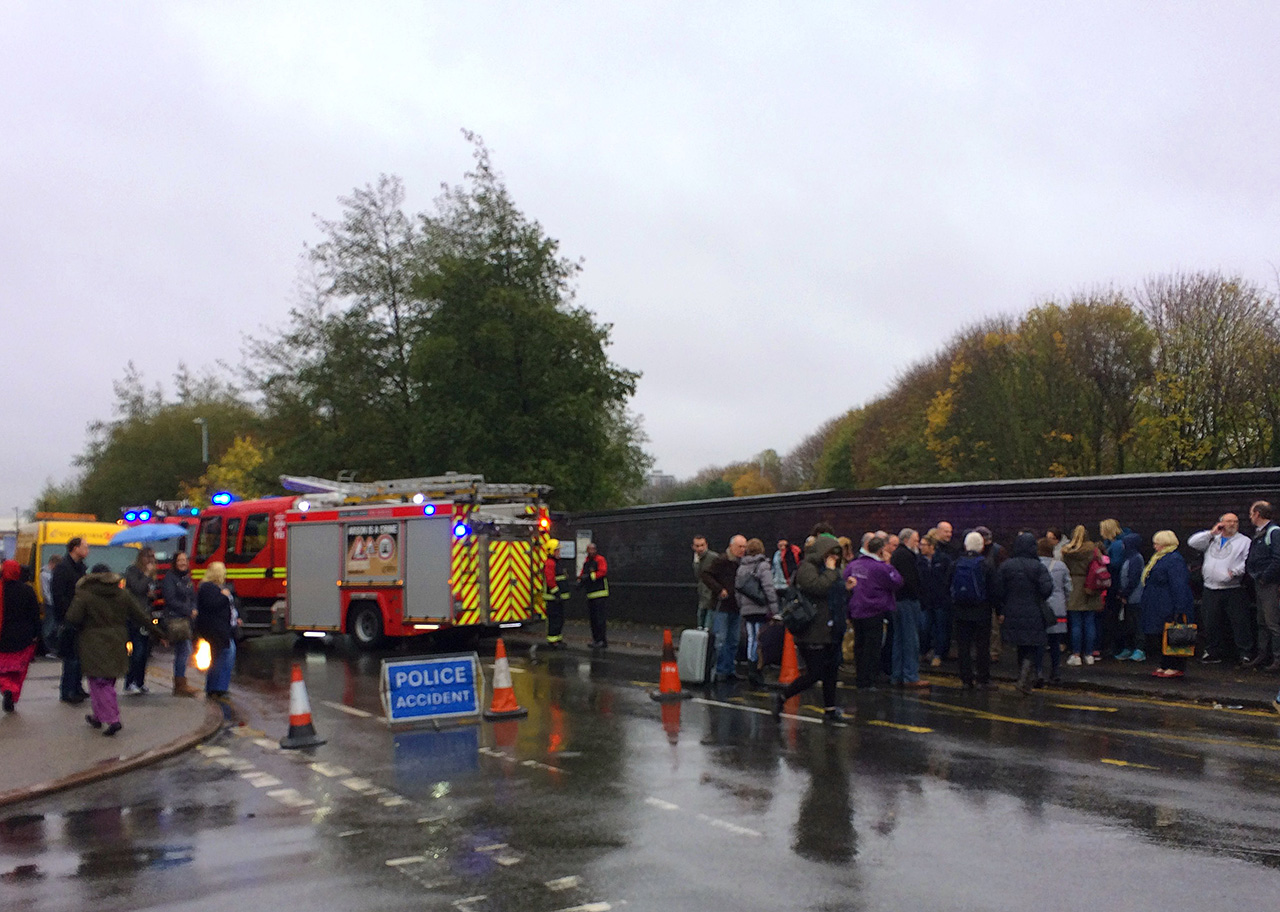 You never know when a news story might present itself to you – so as a journalist it pays to be prepared, and keep your nose for news well-honed.

When I found myself, unexpectedly, in the middle of a breaking news story here’s what I did.

At Wolverhampton railway station I boarded the late-running 0809 Arriva Wales Trains service towards Birmingham, where I planned to change for a train to Coventry. There was nothing to suggest anything amiss.

Like most of the passengers on the train I had no idea what was going on when an alarm sounded. Usually these things are false alarms, or someone is ill and needs to leave the train for medical attention, so nothing for anyone else on the train to worry about. I was near the back of the train and the train manager, and a British Transport Police officer who I’d seen board the train at Wolverhampton, both hurried past towards the front – but in itself that was no real cause for alarm or interest.

The first I knew of a story ‘with legs’ was when passengers started filing down the gangway, and I overhead some saying they had been told to leave the front carriages – because the train was on fire.

I looked at my watch.

Whenever you report on anything, you need to get as many facts as you can and try to answer the six key news questions – Kipling’s ‘six honest serving men’ – who, what, when, where, how and why. One of the facts I could easily establish was when these events were taking place, so I made a mental note of the time.

The train then stopped at Smethwick Rolfe Street station and we were asked to leave both the train and the station. By the time the doors were open I’d grabbed my phone and started up the camera app to get a shot of the train as I left. But there was no way I could grab a picture without impeding other people trying to get out of the station. So I followed the crowd up the staircase to Rolfe Street.

As I queued for the stairs I counted the number of passengers ahead of me and looked back to estimate how many more were still to come. When I finally reached the top I saw one of the station staff coming down carrying two fire extinguishers – and made another mental note.

I heard emergency vehicle sirens and guessed it would be a fire engine, so I crossed the road to get a shot of the fire engine in front of the station buildings, and noted the time it arrived – 0836.

A second fire engine arrived two minutes later, and then fire service personnel and police started closing Rolfe Street. I got pictures of the fire engines being moved and signs being placed on the street.

I now had plenty of facts and could imagine there would be more to come. So I found my notebook and pen and started noting down all the things I’d seen and heard – the time of the alarm on the train, the actions of the train manager and policeman on the train, comments made by passengers as we left the train, the arrival time of the fire engine and so on.

I also made notes of comments passengers were making as they passed by, saying they had been advised a bus service would be provided, though it wasn’t known when, and that an alternative was to walk down the road to Galton Bridge station and catch another train from there. I didn’t end up using this information in the story – but it was useful to know how to continue my own journey later.

I tweeted and emailed pictures to some local news organisations, though I don’t think they picked up the story. Maybe trains catch fire all the time in Smethwick.

Update: Expressandstar.com used two of my pictures with a story they posted later that day.

By now I realised I was going to be late for my meeting, so I called in to apologise.

I walked across the bridge to the other side of the tracks and turned left at the end to look for the bank I had identified earlier which might give me a view over the scene. A couple of minutes’ walk and I had found it. I clambered up the grassy bank – frightening away a breakfasting rat – and found I had a good view over the stricken train. Unfortunately the pictures I could get from there had little to indicate the train had a problem – unless you could spot the blue lights of the fire engine through the trees on the far side of the train. But at least I now had a clear shot of the train.

It was a 10-minute walk to Galton Bridge station, where I could take another train towards Birmingham. I shot a picture of the police cars that had closed off the end of Rolfe St as I walked past. Then as I continued towards Galton Bridge I started to wonder about Arriva Trains Wales’ safety record, and the quality of its trains – which I’ve used a lot, and they’ve always struck me as old and a bit dishevelled. So I started doing a bit of internet searching while I walked.

I quickly unearthed a recent report on Wales Online where Arriva Trains Wales’s policy director Roger Cobbe told a Commons committee that the company’s trains were the oldest in Britain, and a constant challenge to keep running reliably.

0925: Story could have gone online

I wasn’t under pressure to get the story written for an online news outlet, so I set about resuming my journey to Coventry, via Galton Bridge, Snow Hill and New Street. If I worked for a news website I’d have found somewhere I could sit and work and typed up the story, and I reckon the first version would have been online in half an hour. I downloaded pictures from my phone to laptop, cropped and resized them in Photoshop, and posted them online along with the 450-word story. It would have been online just about an hour after the incident began.

Be ready for news